The single from The False Poets' forthcoming album Strange Season, it's Glissando. 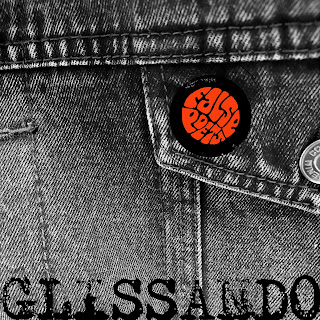 Available from nicemindrecords.bandcamp.com Glissando is backed with another original False Poets song from the Strange Season sessions, Drama Queen, as well as a coruscating mix of the A-side by nebulous label-mates The Support Band. 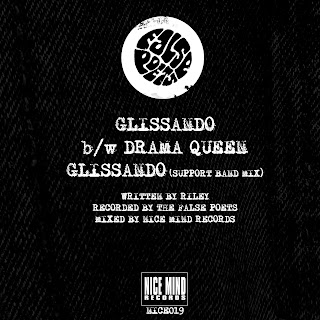 "This first cut from the second album by The False Poets is a slice of western bagadashio. Slouch with a greased fret, it moves with gentle thrusts at an early 90s indie disco, pre-empting Tim Burgess’ falsetto by a few years while sliding down a Noelesque firepole when he was vibrant and relevant.

This isn’t to say The False Poets are burying themselves 30 years in the past (their natural garage golden nuggets reflex tendencies precede that by a further 30 years usually, so if anything they are comparatively bang up to date). Glissando is a fresh listen, searing into an ear worm of shrugging chorus (“put on a different face”) and looped hummable guitar line ingratiated with melody and swagger.

It stings from the off, that bounce and sling repeat settling into a casual louche rhythmic cool, standing tall in a glistening ball of betrayal turned to energy.  There is a literal titular reflection in the music, this dramatic surge pitching one note to another, and lyrically the rub of extravagance and decadence distending to any reprieve of lofty heights being the fall.

“You try to drag me down” prevails Chris Riley, frontman and sole guitarist this time round, pushing back until a crashed out fade is left to tumble and drift…

Shuffle and sling, Drama Queen comes in, an exclusive non album bonus, with its roots in the rhythm section pomp and pump to drive it, Peter Dinsdale and Ian Carroll on 4 strings and stool respectively.  A sub 2 minute dance floor filler, with persistent blues licks jumping around frets throughout, behind vocals to solos and back, it carries inverted nursery rhyme logic and classic hard done by heartbreak.

From baggy to R&B, The False Poets return with sounds of two era defining musical legacies remembered, revived and revigorated.  And the promise of more to come…"

NICE019 The False Poets - Glissando. Out Now on Nice Mind Records
No comments: