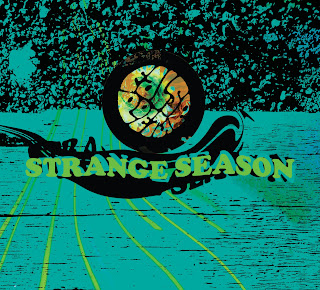 The next label release is NICE021 The False Poets second album Strange Season. 13 original tracks from the band. The album is available to download and stream from nicemindrecords.bandcamp.com where you will also be able to purchase a limited edition CD from.

The album is available from Apple Music here.

Read a review by The Rocking Magpie here!

And here is our very own label scribe VH Monks with his write-up of the album:

An album from lockdown, a socially distanced musical jigsaw, partly recorded during moments of eased restrictions, or simply from wherever the band members (Riley – vocals & guitars & other noises, Caroll – drums, Dinsdale – bass) found themselves disbursed.  Strands while stranded, pieced and joined.

The album’s title is drawn from the Alfred Austin poem A Winter Rose, although that song was written before it was found.  Despite Poet Laureate status, whilst most of the poem doesn’t lend much outside of twee and a p(r)etty loneliness, the phrase ‘Strange Season’ seemed apt and fit to tell.

We jump straight into a land of runaway riffs with Read the Sky, and like so many of the tracks there is a jangly, upbeat immediacy snapping hold of your senses, its rolling in the sun verse-chorus combo never letting up.  The bounce of tremolo embodies the relief of music, the solace of melody, the peace of song, which the track espouses.  Lead single Glissando too gives good rhythm, rugged and pulsing and primed throughout, the sparkling sliding scale of Riley’s guitar a shimmering reflection over a broken mirage.

Previously an exclusive ‘backed with’ track, elevated to album status, Drama Queen is a sub 120 second romp of skip smooth garage n blues, screaming fun through every one of those seconds. Stupid Thing too, its loose boogaloo starting as a crawling living unfurling ball of suspense, with Carroll’s lead weight beats somehow flying skywards, ratcheting into a rock n rhythm tribute riven with nonsense nursery rhyme and retribution to critics and enticement to live.  Full of fun and then slinking away. Bo Diddly is a Poet makes a trio of this sense of mischief and musical amusement, a blues strum pastiche led by – what else? – the rolling rhythm of Bo’s Beat, as thigh slapping and chest beating as when Holly and Eddy and Otis paid homage.  A throwback indeed, but something wonderful that such musical history can still repay, refuel and rejoice… imagine a more modern technical refrain nowadays, usually impotent before it enters whatever passes for a chart.

There is a certain brightness on much the record, songs which have stared at the sun too long, and provide regeneration from the band’s own history .  How Many Days sees Poets’ writer Riley ransacking his solo cannon for an inspirational revamp, a lovely contrast to its origination, a happy, countrified, electrified take on lost love.  Still managing not to make this a sticky sweet dive into a pot of honey, while heartfelt and lonely, musically it comes together like a group of friends, recollecting in tribute, a dance, a hop, a groove, a bop.  Sunburst too, a slingback western tinged with joy, shiny and shivery fills as lines end, and kit rolls which delight like butterflies dancing on helium.  The verses shimmy on melting ice but the solos keep things warm and lively.

Moonstruck offers a chiming tone, downbeat and surly, burning a sombre hole and twirling spiral to the centre of the record.  A story of hesitancy, of perhaps the state we’ve been living in lately, paranoia and fear and isolation.  Dinsdale’s bass line is a calm gloom, bringing the perfect sense of something looming that could be evil or… a quest for liberty in a modern medieval twisted tale? A Winter Rose is the other to bring a slower scaled, twist and turn key changing reverie, again of a time that feels a little unsure of itself.  Half a yearning and never coming to terms tale, the other a morose instrumental of soft drama and lachrymose…

Another plight comes in Tillie’s Blues, where everything dances from the elastic band strum jerks to limerick like wrapped vocals, the solo tight to the fret and the only restrained part of this slack and illogically breathless trip.  It reels out with an hypersonic door closing, lending a spacey out of place departure from Tillie’s world.

Much of the album spends time looking over its shoulder – in love, in fear, at people, places and times.  But not (despite its title) one of the album highlights, From the Past, which hurtles from the imaginary gates of the illusory vinyl’s second side very much facing forwards, an attempt to disentangle in jangles the wiry circus of emotions we drag around everyday. The opening chords slam over a motivational guitar riff of encouragement, the last remnants of memory and doubt trying to hold the shake off back, before the traps are opened.  It’s a rush, a disbelieving lunge towards a changing future.  The vibrating and hanging, dislocated mirage close offers the choice, not the conclusion.

A jagged, ragged, tearaway, dirty nosed and bloody fisted invitation to freedom comes with In the Air, unfurling triggers to step into the light, to celebrate a moment rather than the anchoring and cumulative nature of time’s drag and disposition, an atmosphere caught earlier with Glissando too.

Dead Man Shoes closes the album’s door, with big rafts of mood and attitude tethered.  With the lowest word:time ratio, it’s a veritable epic band jam of acoustic mementos, bass mood lines team tagging electric slick licks and slacker picks and sullen tricks.  The first segment warms the hungover cowboy and throws him on his horse in the burning high noon sun, the latter seeing him slicker, on point, six shooter straight to target.  Live, this could spiral into a sprawling mesmeric blast of free form magic, and you’re left ever hopeful for when bands can take to the stage again, in the hot crowded environs of hazy blistering musical entrancement.

Across the album, every space is filled with a riff or solo or flurry of notes, but far from not allowing the songs to breathe, this packed like sardines levity brings a never-ending romp through a boundaryless musical maze.  Find your way through or get lost for a while, either way this is a creative, earworm wending blast to finally hear.

The album is available on CD, download and streaming at nicemindrecords.bampcamp.com

For Spotify users, the band's profile is here.