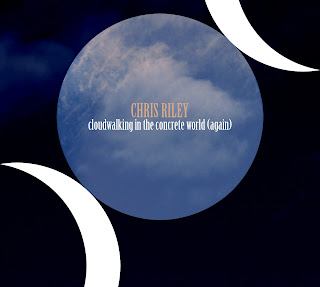 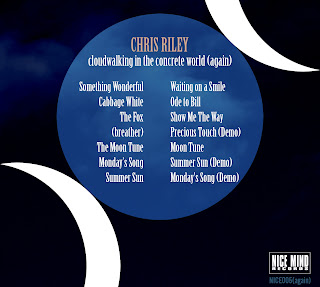 recorded and released in 2004.

And here we are (again), as the repackaged is repackaged to welcome NICE005

(again), with Chris’ recent prolific endeavours under various guises this past couple

of years, stuck under the microscope of introspection to find from whence things not

only came, but also developed, with the addition to this compilation of demos, and

The original EP covers the first half, 7 tracks starting with the almost epic Something Wonderful. An

acoustic rhythmic rollercoaster, which at a minute and a half kicks in

with these bright shiny kit beats that fall away to a hypnotising bass line drive, thanks

to the brothers Sinclair. Chris’ voice is plaintive and soulful. And then the flute from

Sarah Williams, this two-tone lifting and lighting. Melancholia in the sunshine.

Cabbage White is finger pickin’ good. Genuinely lovely, taking the bones of a

relationship and holding it up to the light. There’s no accompaniment, but it is scene

setting and dives deep. Despite the wintry lyrical surrounds, there is warmth from the

memory and rarity to the moments recalled.

The Fox is an effective number that runs with its hero, the chase amongst the chords

vocal percussion, and gentle sighing da-da-do-dums bridging to the denouement.

After the chase, the rest. (breather) is a thing of absolute beauty, Nick Drake resting

on a cloud, nature’s behest. A tender interlude, an instrumental haven that slows

your heart and sharpens your mind. The flute brings flashes of brighter rays through

autumn trees in the second half, washing in tandem with Chris’ magical guitar flurry

The essence of pagan mystery stirs in The Moon Tune, lines lifted from the Book of

Ruth. Another number with the full rhythm section behind him, and it’s pretty vibrant

This was originally conceived for his earlier band Mock Fish, a version included as an

extra on this reissue, recorded about a year before. Production maybe sounds

warmer, but the EP version seems more fully realised (as well as carrying an extra

like the day itself. This gentle plucked refrain opens as frets sigh, a reluctant

contentment, his voice joining in a reflective vein, perfectly fitting the solitude, of this

empirically the songman, alone on stage, rested in the comfort of his music as mate

overcoat and it’s made out of laughter”). This EP closer shuffles with the blues from

the shadows, sings of hope and learning, comes with bongo percussion that sits

These final couple of tracks have their demos included on this expanded edition,

studio, the songs meld beautifully in voice and melodies and music; feelings and

The other demo featuring here is Precious Touch, equally more playful and sombre

than the Cloudwalking material. It eventually appeared on Riley’s 2009 EP Moments

Stolen Back, a bluesy torch paper wake up song, certainly nudging you to check out

Of the 3 other ‘new’ songs creating the backbone to These Riley Musical Adventures:

The Mandalas were a 2005 outfit featuring Chris, Peter Dinsdale (bass, now with The

ferocious lambast, which very much could have been written today.

Waiting on a Smile is a smoother, more charmed piece, sent on the Captain’s

Moonbeams, exploring the versatility and ideas and range of Riley. It’s sweet,

When Iain left the three became Justroy, and included here is a shaken up Show Me The Way, recorded

rejuvenating lead revolts against this lethargic senseless quagmire we endure. One

of the earliest written in 1997, just after those metal days.

First and foremost, it’s a record about relationships really – with people, with nature,

with yourself – and communicating with each other and inbetween. Which isn’t a bad